Dr Heidari explains why it is essential to incorporate methods of sex/gender analysis into research design and communication and how different agencies and actors: regulatory agencies, research funders, research trainers, journals and ethics committees, can support this process.  Research reporting is often gender blind by not explaining why there are observed differences in the male and female populations studied. It is not enough to report the balance in participation, observations and results need explanation. For this, Prof Heidari recommends the SAGER guidelines and used the case of COVID-19 pandemic to show how important gender-sensitive reporting is. 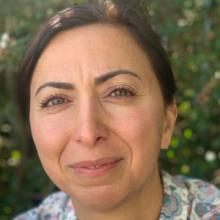 Dr Shirin Heidari is founding president of GENDRO, an association with the mission to advance gender-sensitive research and data analysis. She is also Senior Technical Consultant on Gender and Health to World Health Organization (WHO). In parallel, Senior Researcher at Global Health Center and Research Affiliate at the Gender Center at the Graduate Institute of International and Development Studies, in Geneva.

Before joining the Graduate Institute, Dr Heidari was the Executive Director of Reproductive Health Matters and Editor-in-Chief of its peer-reviewed journal, and prior to that she oversaw the Research Promotion Department of the International AIDS Society and was the editor of Journal of the International AIDS Society. She received her doctorate degree in clinical virology and experimental oncology from Karolinska Institute in 2001, where she continued as an HIV researcher until she moved to Geneva in 2007.

She has been a board member of Amnesty International, Sweden and is the founding chair of the Gender Policy Committee of the European Association of Science Editors (EASE). She is the lead author of the Sex and Gender Equity in Research (SAGER) guidelines and has given a TEDx talk encouraging gender sensitive research and scholarly communication.