Gender aspects of COVID-19 and the need for better data

Dr Mahmood raises attention of the effects of the COVID-19 pandemic: what are the gender dimensions of this crisis? Women are at the centre of health care and care at home, and when the focus is on the pandemic itself, their health needs, e.g. reproductive health, become overlooked. Similarly, COVID-19 has increased the level of gender violence on women. In the future, it is necessary to strengthen communication directed at women and ensure that gender dimensions are taken into consideration, regarding sex and age in particular. Policy makers need to pay closer attention to how gender dimensions influence effects of disasters, and have access to the relevant data to analyse what policies are best. 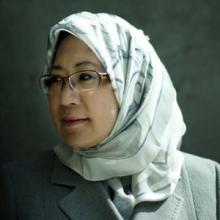 Special Advisor of the Prime Minister of Malaysia on Public Health

Tan Sri Dr. Jemilah Mahmood is the Special Advisor of the Prime Minister of Malaysia on Public Health since April 2020. She is a renowned humanitarian, well known for her role as founder of the medical NGO MERCY Malaysia in 1999. She recently returned to Malaysia having been the Under Secretary General for Partnerships at the International Federation of Red Cross and Red Crescent Societies (IFRC) since January 2016. Dr. Mahmood was the Chief of the World Humanitarian Summit secretariat at the United Nations in New York, and her previous appointments include Chief of the Humanitarian Response Branch at UNFPA; Senior Fellow at Khazanah Nasional Berhad in Malaysia’s Khazanah Research and Investment Strategy Division, and Senior Visiting Research Fellow at the Humanitarian Futures Programme at Kings College in London. From 2006-2009, she was one of 16 members appointed by United Nations Secretary-General to the Advisory Group of the Central Emergency Response Fund.
Her vast experience has encompassed from healthcare in crises and non-crises situations, emergency coordination, partnership and resource development, strategy, policy, knowledge, innovation as well as strategic communications.
Dr. Mahmood has held many Board positions in NGOs and INGOs and is the recipient of numerous national and international awards for her contribution to civil society and work in support of marginalized communities, including the first Isa Award for Services to Humanity from the Kingdom of Bahrain and the Merdeka Award from Malaysia. She was recently awarded the ASEAN Prize in 2019. She was recently Civil Society Governor of the Commonwealth Foundation until January 2020, and is a board member of the Global Responsible Finance Institute. She is also an active member of the United Nations Disaster Assessment and Coordination team (UNDAC) since 2004 leading many missions including to Pakistan and Myanmar. She has also received royal awards from the Federal Government of Malaysia (PSM and PJN).
Her appointments in the Government of Malaysia include being on the previous Health Advisory Council to the Minister of Health (2019) and more recently as a member of the Economic Action Council.
She graduated as a Doctor of Medicine (MD) from the National University of Malaysia (UKM), has two post graduate degrees including Fellow of the Royal College of Obstetricians and Gynaecologists United Kingdom, and a Masters in Obstetrics & Gynaecology. She also completed executive education at the International Management and Development Centre, IMD Lausanne.